A high-tech solarpunk utopia in the Amazon rainforest, a Pikachu fine dining with a view to the Eiffel Tower, a mecha robot in a favela in expressionist style – if you are struggling to visualize any of these descriptions, an AI art generator could most likely help you out. All of the prompts are suggestions by Stable Diffusion, an open-source AI art generator launched in 2022 by startup Stability AI.

As its name suggests, AI-generated art refers to art generated with the help of artificial intelligence. I like to use AI art generators to help visualize environments, such as where I would rather be writing this blog as the weather gets chillier in Toronto. 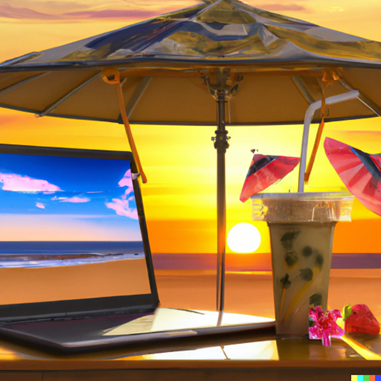 An AI-generated image of the prompt “a laptop and bubble tea on a table under a parasol at a Hawaiian beach during sunset, photorealistic” by Stable Diffusion.

Aside from being a fun tool for curious users to play around with, AI art generators serve as a useful tool for visualizing concept art and automating repetitive tasks. Furthermore, in more recent years, AI art has enabled artists to explore previously uncharted territory. For example, Lynn Hershman Leeson’s Shadow Stalker “uses algorithms, performance, and projections to draw attention to the inherent biases in private systems like predictive policing, which are increasingly used by law enforcement”.

Similar to previous models, Stable Diffusion is a text-to-image generator (similar to DALL-E 2 and Midjourney). It differs from these models in that it is open-source, meaning that its underlying code and model has been trained on publicly available data. The motive stems from Emad Monstaque’s (Founder of Stability AI) belief that we will only realize AI’s potential to solve humanity’s biggest challenges “if the technology is open and accessible to all”. Stable Diffusion’s open model equips anybody with a web browser to generate images (including violent and pornographic ones) according to their prompts, including for commercial use.

Why Visual Artists are Concerned

Open-source AI-generated art can be seen as a threat to commercial artists in practically every industry. In an article from MIT Technology Review, Greg Rutkowski, a Polish digital artist, spoke about the difficulties that have come with his artwork’s popularity in the world of text-to-image AI generators. Known for his distinctive ethereal style, Rutkowski found his style becoming one of the most commonly used prompts in Stable Diffusion. Initially, the artist thought this was an effective way to gain publicity until he realized through some Google searches that his name was becoming associated with work that was not his.

Rutkowski is not alone – more artists are beginning to see their artworks gain popularity with similar models and have raised copyright concerns. Others have raised concerns about data protection and privacy due to their artwork being either personal or linked closely to an existing person. These concerns have consequently stirred conversations about the potential for artists to opt out of the data training process. However, some say this would be impossible as it would involve throwing out the whole model “built around nonconsensual data usage”. Moreover, with the source code out in public, some are under the impression that it will be like “putting toothpaste back in the tube”.

While some companies and artists have been optimistic in their beliefs that AI will ultimately benefit humanity and generate new ideas for their careers, other artists are finding it necessary to build a coalition to fight back with proper regulations and protect the future of their professions.