According to Copyright Lately, tensions are rising in the Livingston family as to who earns the royalties from the Academy Award-winning composer, Jay Livingston’s hit songs.  These songs include hits such as Que Sera, Sera and theme songs for various television programs. Jay Livingston’s granddaughter, Tammy Livingston, launched a complaint against her mother Travilyn Livingston on July 17, 2022 and her publishing company, Jay Livingston Music Inc, for exercising copyright termination rights in several of her grandfather’s songs. The family feud sheds light on some interesting consequences of the termination provision, and how they may diverge what the artist originally intended. Copyright law may diverge from what the artist originally intended.

Jay Livingston is known for co-writing several famous compositions, such as Que Sera, Sera, Bonanza and Mona Lisa. The composer died in 2001 and left a detailed estate plan to ensure that his family members get a share of royalties from his songs. The complaint states that Jay Livingston established trusts that took over 15 years to design and required the assistance of several estate planning attorneys. The complex trust relationships were outlined in the complaint. 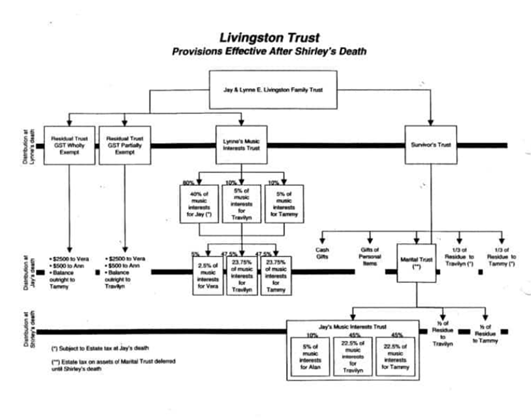 All these elaborate plans, however, were thrown into disarray when Jay Livingston assigned his song rights to Travilyn Livingston’s music publishing company, a year before creating the estate plans. According to section 203(a) of the United States Copyright Law (Title 17), authors and their statutory heirs can terminate copyright assignments and licenses made after 1978 as early as 35 years after they were first created. Travilyn Livingston exercised exactly that right and terminated the assignments to Jay Livingston Music 35 years later. As a result, any further royalty income will be out of Tammy Livingston’s reach if the terminations are found to be valid.

But what about what Jay Livingston wanted? Transfers by will are not subject to copyright termination, but since Jay assigned his copyrights to Tammy’s company, the termination rights are still exercisable.

The Deal with Copyright Termination

The US Copyright Law also defines the heirs entitled to serve a termination notice. In the Livingston situation, since the artist’s spouse is deceased, the entire termination interest will be held by the artist’s children. Consequently, Travilyn Livingston, Jay Livingston’s only living child, is the entitled heir and holds all of Jay’s termination rights as well as all the recaptured copyrights, despite the composer’s clear intent for Tammy to receive her share.

The copyright termination clause is meant to give authors the opportunity to regain rights in works they may have signed away when they had little bargaining power”as well as give the artist’s heirs “a second chance to exploit previously-assigned copyrights”. The Canadian copyright regime (the Copyright Act) similarly has section 14, the reversionary right, which excludes works made in the course of employment. However, the Livingston situation shows how the copyright termination statutes can be deliberately wielded to ruin detailed estate plans left by the artist.

To avoid similar situations, estate planners should plan ahead and include any copyright interests in a will or pour-over will to ensure that their strategic plans will be carried out after their passing. But with no will to be found, Tammy Livingston will just have to take her grandfather’s advice, whatever will be, will be.