Anita Gogia is an IPilogue Writer and a 2L JD Candidate at Osgoode Hall Law School.

Pessimism is to innovative culture as heat is to ice. It slowly destroys but can be remedied by its polar opposite. On April 28, Halimah DeLaine Prado, the general counsel at Google, wrote about her optimism for innovative culture in an online post. She outlined reforms and recommendations that preserve the culture of innovation, advance the development of new technology, and reward entrepreneurs who are building new products that benefit people everywhere.

Google’s contribution to the US patent system

Healthy patent systems can sometimes be described as a way to incentivize creative inventions, encourage building on existing ideas, and avoid frivolous litigation. Google has created a space that incentivizes innovation by being one of the first companies to pledge to not sue any user, distributor, or developer of open-source software on specified patents unless an attack was instigated against them first. Google has invested in patenting and licensing their engineers’ inventions (42,000 home-grown patents), and has sold patents to smaller companies to help strengthen their portfolios. Google also helped discover the License on Transfer Network. This Network protects members from patent trolls’ claims, these ‘patent trolls’ are described as companies that bring patent claims for profit and to supress competition.

Concern with the US patent system 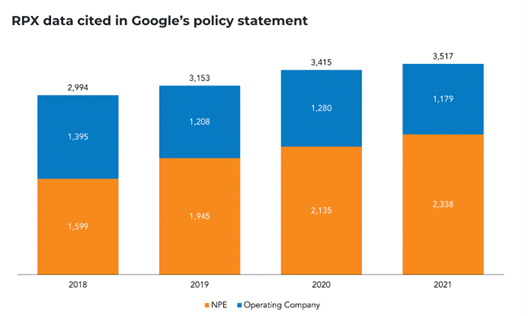 Patent trolls and opportunistic companies, as DeLaine Prado describes, weaponize patents against competitors which deters innovation and harms the quality of new products. Most notably, DeLaine Prado says the American “prized ‘culture of innovation’ is being undermined by a ‘culture of litigation.’”  Such litigation wastes court resources and are a shakedown tactic or attempt to “stretch patents beyond recognition.” Resources spent on wasteful litigation is better used in research and development for new products. In contrast, Google has a history of confronting overreaching patent claims and defending their users and products. Smaller companies producing “nascent technologies” are unable to fight these lawsuits without raising costs for consumers or harming their ability to create new products.

The PTO receives approximately 600,000 patent applications yearly, more than half of which are approved to balance incentives for investment and freedom to innovate. The evaluation process has not been streamlined because PTO employees are under-resourced despite the PTO working on AI solutions. Such inefficiency leads to possible issuances of invalid patents, inventors may then be unable to protect their inventions confidently. Others end up having to defend infringement claims against patents that should never have been granted in the first place. Google recommends that investing in the patent office can help prevent such issues and are optimistic that “important work can finally begin” by the new director of the PTO, Kathi Vidal.. Google also supports funding the PTO by increasing fees for larger patent filers (including themselves).

At the judicial level, Google hopes Chief Justice Roberts urgently investigates the judicial imbalances caused by abusive forum shopping. DeLaine Prado recommends ending forum shopping as many companies suing patent claims may damage the integrity of the judicial process. In a year-end report on the federal judiciary, Justice Roberts pledged to direct the judicial conference to address patent venue rules and that the conference would work with the congress to make changes if needed. The extreme concentration of patent cases in Waco, Texas in Judge Alan Albright’s court has concerned Senators. To illustrate, approximately 20% of all US patent litigation is filed in Judge Albright’s court. 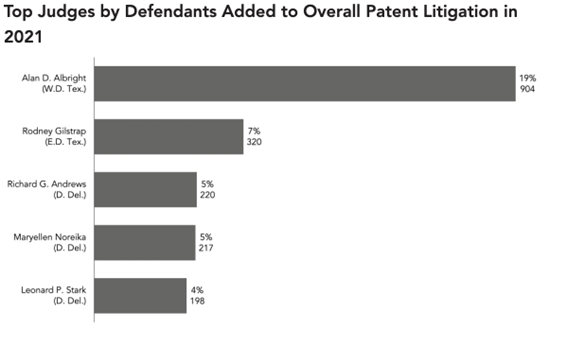 Google supports legislation before congress that reduces abusive patent litigation, restoring access to inter partes review, and increasing accountability. Inter partes review was a program created by Congress as part of the America Invents Act that helps companies cost-effectively invalidate low-quality patents. This program was created to provide expert review of patents with the greatest impact on the US economy, however changed PTO rules created some barriers to use the program that could be reduced.

Overall, Google’s concern with the lack of promotion of innovation and creativity by the US patent system will likely spark debate and potential reform in the near future.