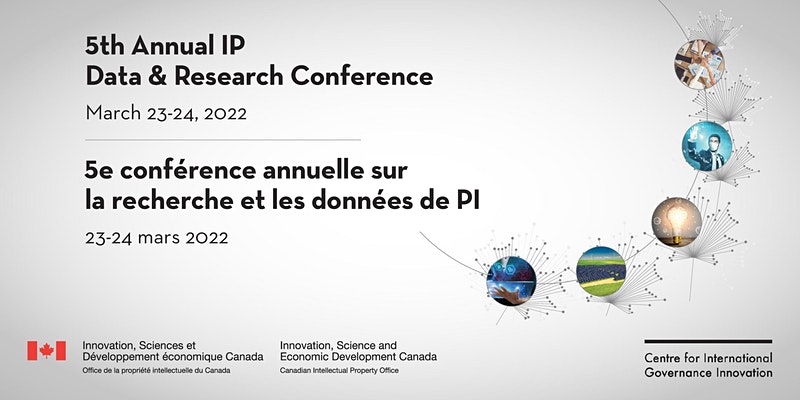 Emily Xiang is an IPilogue Writer, the President of the Intellectual Property Society of Osgoode, and a 2L JD candidate at Osgoode Hall Law School.

This article is part of a series covering the 5th Annual IP Data & Research Conference, hosted by the Canadian Intellectual Property Office and the Centre for International Governance Innovation.

On Thursday, March 24th, 2022, the Canadian Intellectual Property Office (CIPO) and the Centre for International Governance Innovation (CIGI) hosted their 5th Annual IP Data & Research Conference. For their third themed session, “IP Metrics”, experts were invited to speak about the ways they have been observing global IP trends, making IP data more accessible, and measuring the impact of IP on economic growth in Canada.

Where do Canadians Patent? Implications for Canada’s Patent Regime

Joel Blit, Professor of Economics at the University of Waterloo and CIGI Senior Fellow, kicked off the session. Blit examined the countries in which Canadian investors filed patent applications and sought to determine the extent to which the Canadian patent regime fosters domestic innovation. He found that Canadians were increasingly filing patents abroad, with more Canadians filing in at least one other country each year. Results also showed that patents filed exclusively in the US related to more advanced fields of computer sciences and technologies, while Canada-exclusive patents focused more on special-purpose machinery and the resources and energy sectors. Canadian patents also tended to belong to individual inventors rather than larger assignees, involved fewer inventors, and were cited less frequently, making them relatively less valuable in the global market for innovation.

Blit puts forward several potential explanations. One is that the Canadian patent system is providing less incentive over time for protecting domestic innovations. Another explanation is that Canadian patents are too strong, meaning it may be preferable to “weaken” them by setting higher examination standards, limiting patentable subject matter, or reducing the scope of issuable patents. That Canadians are increasingly patenting abroad could mean that Canadian inventors are becoming increasingly sophisticated, yet it could also mean that Canadian innovations and ideas are more frequently bought up by multinationals. Either way, the current Canadian patents regime seems to play a relatively minor role in promoting domestic innovation worldwide.

Nicholas A. Pairolero, Economist in the Office of the Chief Economist at the United States Patent and Trademark Office (USPTO). delivered the second presentation of the session. Pairolero’s team sought to make data on AI more accessible to the public by developing a novel dataset that identified AI tech components in over 13.2 million USPTO patents and pre-grant publications.

After first determining a definition of AI, Pairolero and his team searched through USPTO’s patents using an automated machine learning (ML) model that differentiated between patent documents that did and did not contain any AI component technology. In the evaluation stage, expert AI examiners evaluated each document for AI component technology. Compared to more traditional, query-based approaches, the ML approach resulted in relatively lower precision (as a much larger number of documents were identified as containing AI), but a much higher recall (higher probability of correctly identifying AI). Moreover, both machines and humans seemed to struggle with classification at the boundaries of the various AI component technologies. However, results indicated that the ML approach achieved state-of-the-art overall performance relative to a variety of existing benchmarks from academic and policy literature, holding much promise for the future of automated processing in expediting the transmission of publicly available data.

Missions, Mandates and Metrics: What are the Right Metrics for Academic Technology Transfer?

The session concluded with a pair of presentations by Mike Szarka, Director of Research Partnerships at the University of Waterloo, and Natalie Raffoul, IP Lawyer and Managing Partner at Brion Raffoul LLP. Szarka began by suggesting that most Technology Transfer Offices (TTOs) focused on some combination of a) maximizing gross revenue and licensing income generally; b) focusing on the few projects that would maximize profits; c) maximizing knowledge mobilization and research impact; d) maximizing local economic growth, and e) maximizing client satisfaction and prioritizing the needs of faculty and students. Szarka’s surveying of TTO directors across the country demonstrated that knowledge mobilization, economic development, and service to academic communities ranked much higher in the minds of the respondents than revenue generation, indicating that commonplace TTO metrics focused on royalties do not reflect the true priorities and missions of most TTOs.

Raffoul identified several alternative metrics focused on “the betterment of Canadian society”. Average reported business expenditures invested into research and development (BERD) and labour productivity have been low in Canada compared to the global stage. The greater concern is whether Canadians are owning their ideas and subsequently having the opportunity to commercialize those ideas downstream (instead of assigning their rights over to foreign firms). Raffoul suggested that TTOs ought to track the number of patents they are licensing/optioning/transferring to Canadian headquartered firms compared to foreign ones, along with the revenue generated from those licenses/options/transfers and any research collaborations with those firms. For company-sponsored academic research, co-ownership of patents ought to be held up to co-authorship of papers and publications, in order to correlate evidence of knowledge creation with the ultimate ownership and control of that knowledge.

Though there is much work to be done for Canadian innovators and owners to remain competitive in the global market, the most recent advancements in research and technology prove that Canada is well-positioned to identify shortcomings and well-equipped to tackle them.