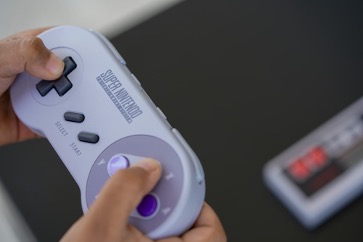 Earthbound is a 1994 role-playing videogame (RPG) released in North America on the Super Nintendo Entertainment System (SNES). It is the second entry in Nintendo’s Mother series and the first to be translated and released outside of Japan. The game is satirical, featuring many zany characters and subversive content that mostly provides commentary and homage to Western culture. The soundtrack is just as strange, featuring samples from bands like The Beatles and The Beach Boys, despite the technical limitations of chiptune. The game’s 8-bit songs are inspired by genres ranging from reggae to rock. Everything about the game defies what you would expect from a typical RPG, especially one from 27 years ago.

It also happens to be my all-time favourite game. Many share this sentiment; the game has established itself as a cult classic. Let’s Play videos (LP) are a YouTube staple and popular games will have many LP series. Earthbound is no exception, yet content creators are running into unexpected copyright claims.

Though mass-marketed in a $2 million promotional campaign, Earthbound failed replicate its Japanese success in North America. Copies of the game along with a gamer’s guide packaged in special extra-large cardboard boxes sat unsold on shelves for months. Due to low sales (under 150,000 copies sold in North America), the game remained a hidden gem for years until Earthbound’s main character Ness appeared in the popular 1999 fighting game Super Smash Bros. (SSMB) for the Nintendo 64 (and following iterations), sparking a newfound interest in the forgotten series.

As popularity increased throughout the years, so too did the prices. Since many did not originally own or buy Earthbound, dwindling supply allowed the cartridges’ price to rise far beyond that of a regular SNES game. Many fans and curious gamers resorted to SNES emulation, software meant to emulate a game system, instead of shelling out over $100 USD to purchase the game. Thankfully, after endless lobbying from thousands of dedicated fans, Nintendo eventually re-released Earthbound for the Nintendo WiiU Virtual Console in 2013 and for the Nintendo 3DS in 2016—a move that finally allowed fans legal and affordable access to the game. The re-releases have also enabled many to broadcast their playthroughs with greater ease than previously possible. As it’s not on the Nintendo Switch yet, many who don’t own the older consoles may still enjoy watching others play online.

Let’s Plays & YouTube
Gamers and streamers often upload their gaming content onto sites like YouTube hoping to share their experiences with viewers. This type of video documentation is called “Let’s Play”. Legally publishing videogame footage largely depends on who the developers are and what they allow.

In late 2018, Nintendo discontinued the Nintendo Creator’s Program and implemented the Nintendo Game Content Guidelines for Online Video & Image Sharing Platforms. Nintendo “will not object to your use of gameplay footage and/or screenshots captured from games for which Nintendo owns the copyright (‘Nintendo Game Content’) in the content you create for appropriate video and image sharing sites,” as long as the guidelines are followed. The rules allow streamers to monetize via “methods separately specified by Nintendo.” Nintendo further mandates “creative input and commentary” and explicitly disallows videos lacking such commentary. The remaining guidelines detail Nintendo’s reserved rights, Nintendo’s non-affiliation with YouTubers utilizing their intellectual property, and a FAQ section.

Copyright Claims
Earthbound content and music have remained mostly unscathed on YouTube for many years. Unfortunately, in recent months, many Earthbound players who uploaded their Let’s Plays have been struck with copyright claims from Sony, effectively demonetizing the videos or, in some cases, outright removing them. One YouTuber, chuggaaconroy (with 1.26 million subscribers) recently lost their Earthbound LPs’ ad revenue and their videos were removed. The YouTuber aired their grievances via a Twitter thread, with many fans responding with similar experiences and concerns.

How Does Sony Fit into This?

Nintendo owns the game’s brand and composed its music, but licensed the first two Earthbound series soundtracks to Sony for album releases in Japan in 1989 and 1994. Many fans were unaware of Sony’s Earthbound connection. Even though Nintendo allows LP videos, Sony can take down LPs and related content to protect its rights in the music. Users have attempted to dispute copyright claims, only to allegedly be hit by counterclaims from Sony. Google’s ContentID digital fingerprinting system likely automatically detected Earthbound music and subsequently initiated the claims. ContentID has plagued gaming YouTubers in the past, leading game developers to introduce “copyright-free” friendly in-game music options and Google to introduce policy changes. Earthbound is an old game though, and nobody seemingly knew Sony’s music license for the Japanese album even existed, until these claims arose.

The entire situation is noticeably disheartening for fans of a game where the music is integral to the plot and experience. Even though it is likely an algorithmic flagging issue, and Sony is entitled to defend their IP, the issue seems to indicate a larger problem. YouTube gaming is many users’ livelihood and/or dedicated hobby. Even if Sony eventually allows videos to return, unexpected copyright issues like these make the gaming process unnecessarily burdensome and financially detrimental. Suspended video publication interrupts potential ad revenue; while this may not have consequences for most, it can trouble users with millions of viewers. While potentially disingenuous to the experience, muting or changing the audio might be the easiest workaround to continue publishing LPs.