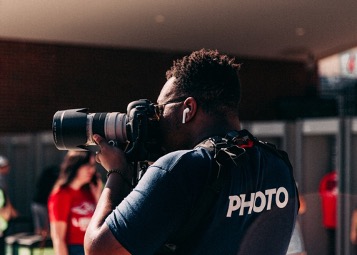 Powerful. Bold. Influential. These are just some of the words that Hadiya Roderique’s Black on Bay Street self portrait emphasizes for a first-generation Black law student like myself. You can only imagine how much an organization could profit from using those photos for a fundraising campaign for Indigenous, Black and people of colour (IBPOC).

Early July 2021, Roderique received a message from a friend who had visited The Hudson’s Bay Company (The Bay) where she came upon Roderique’s photo for the company’s “Charter for Change” initiative. The fundraising initiative sought donations “to reconcile [The Bay’s] past and is committed to change for a more equitable future for all.” The online website page continues to state that it makes “a promise to accelerate racial equity by changing how we invest in communities.” This is ironic because The Bay was using Roderique’s image and face without her consent.

Roderique took to Twitter when she received a text message from her friend saying, “I didn’t know you were doing work for The Bay.” Since Roderique was unaware of the advertisement and was not doing work for The Bay, she tweeted the following: “Hey @hudsonsbay, it would have been a good idea for you to get my permission to use my face and associated activism to solicit donations ‘to support employment and empowerment of IBPOC’, no?” 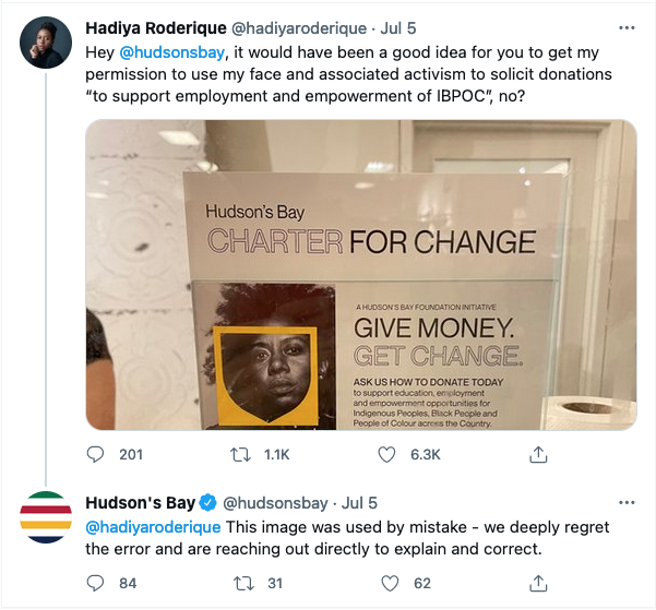 As seen in the image above, The Bay replied: “@hadiyaroderique This image was used by mistake – we deeply regret the error and are reaching out directly to explain and correct.” The Bay made a statement to CBC News saying the picture was taken from the photographer’s website (Luis Mora) as inspiration, but was never changed. The Bay has since removed the image from all advertising.

Roderique said that “The goals of the campaign seem great. But I’m an educator that certainly wasn’t empowered or employed.” The Bay has yet to release further statements about the matter or comment on whether the company will take further action. Roderique said she would like to see a financial donation as this “mistake” happens too often to IBPOC creation.

An entity’s unauthorized use of a photographer’s image engages many legal issues: invasion of privacy, defamation, and violation of the right of publicity, to name a few. Although few laws concern the use of an image without consent, the Charter of Rights and Freedoms, the Criminal Code, the Copyright Act, and the Security of Information Act address these legal issues. In this post, I will focus on the Copyright Act.

Under s. 13(1) of the Copyright Act, “the author of a work shall be the first owner of the copyright therein.” In other words, every photographer owns the photos that they take. According to section 6 of the Act, ownership will last, until otherwise expressed, for “the life of the author, the remainder of the calendar year in which the author dies, and a period of fifty years following the end of that calendar year.” Accordingly, the photo rightly belongs to Luis Mora, the original photographer. Roderique noted that she was unaware of Mora giving The Bay this photo.

However, the Act includes an exception. Section 13(3) states that if the photographer was contracted for work, the photos taken belong to their employer. Additionally, under section 13(4), the photographer can contract out of this complete assignment of rights, and instead grant certain rights in the photo instead of full ownership. Given the comments made, Roderique and The Globe and Mail have some rights over the original image. Nevertheless, Roderqiue maintains that neither she nor The Globe and Mail (that she knows of) gave The Bay consent to use the photo.

Although mistakes do happen, I noticed an abundance of comments online from people who could not see the importance of this issue while researching this matter. Society has a long history of profiting off the work of Black people without giving appropriate recognition or credit. For example, some social media platforms have banned Black content creators for criticizing the lack of credit they receive, all while White creators profit by copying Black creators’ content.

The importance of the issue is not a matter of money or fame, but of dignity and recognition for IBPOC’s hard work. Society is long overdue to give IBPOC the credit they deserve. Large corporations and entities that are not a part of the IBPOC community especially need to stop profiting from IBPOCs’ hard work without crediting its creators.