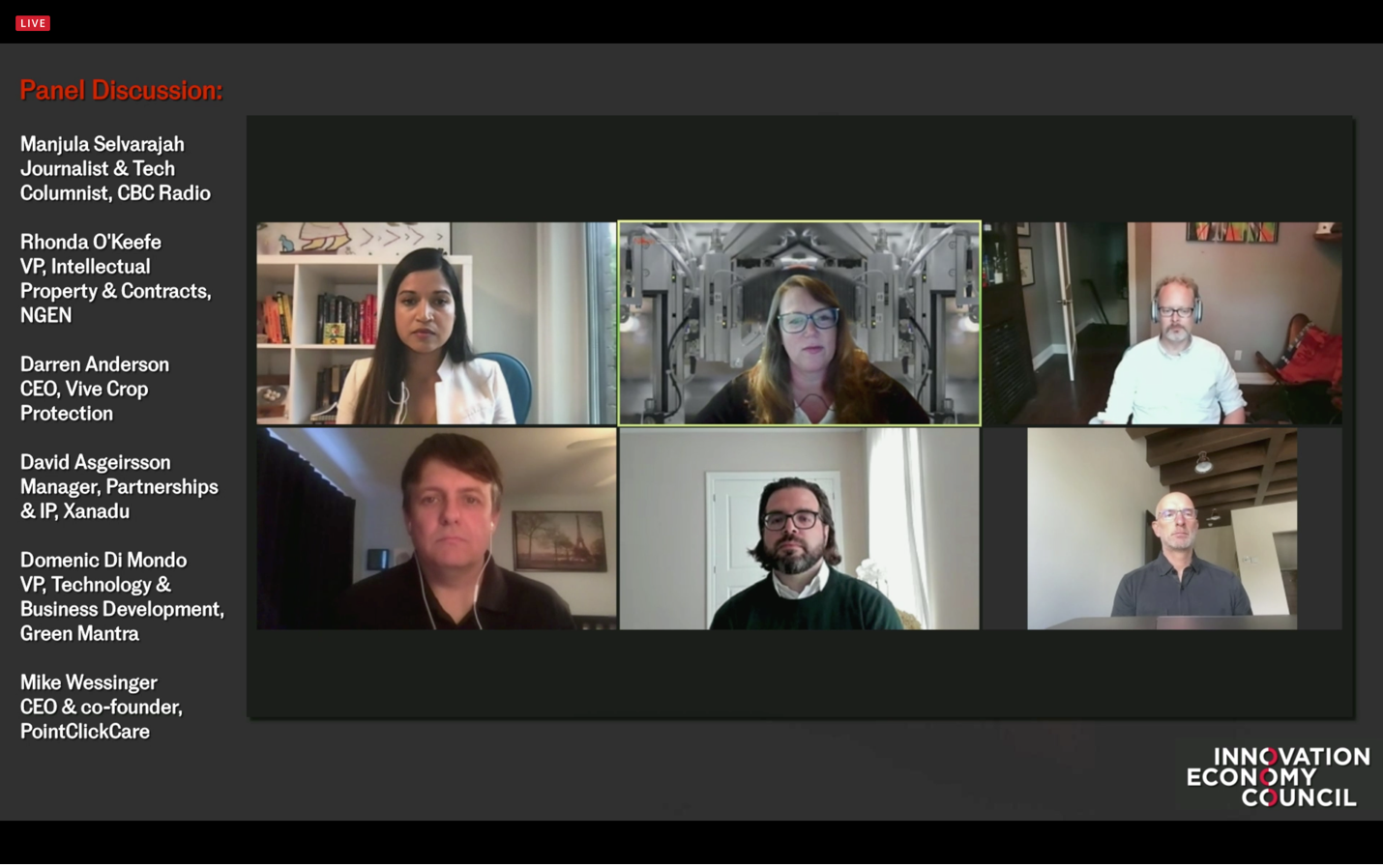 Screenshot from the Innovation Economy Council Roundtable available at https://livestream.com/marsdd/iec/videos/221882833.

The 2021 Innovation Economy Council (“IEC”) Roundtable delivered an exciting discussion around the commercialization of intellectual property in Canada. IP rights can be incredibly important to a business’ corporate strategy both during and after product development. Opening up a corporation’s IP can even be advantageous in fields such as quantum computing.

Though many questions were raised, two in particular stuck out: 1) why are so many patents held by venture-capital-backed Canadian startups in foreign hands, and 2) is this concerning?

What Role Does IP Play In Corporations?

While many may assume that patents are the only and most effective way to protect a corporation’s IP, this may not hold true for every product. For example, although Di Mondo uses patent protection in his company GreenMantra Technologies, he also leverages trade secrets. Patent protection and trade secrets provide different types of protection, depending on the goal. When applying for a patent, Di Mondo recommends asking why and determining how to maximize the value of such protection. Companies must consider the substantial time and money required to obtain a patent, and if it fits within their business strategy. Alternatively, protecting IP with trade secrets requires a plan on how the trade secrets will be effectively protected. This involves deciding how to collect and store the data, determining who has access to company trade secrets, and drafting confidentiality agreements.

For some industries, patents are essential. As Anderson emphasized, since patents are more IP-focused and highly regulated, most of the value and growth of his company Vive Crop Protection is derived from its patent portfolio.

On the other hand, technology industries, such as software providers, barely touch on patent registration. Wessinger explained that a company would have to spend too much money and time in patent registration to be worth it. The technology industry, especially software, moves too rapidly for patent protection to be effective. Barrie McKenna, author of the IEC reports, added that companies do not patent because their products are not so different than others in the marketplace, or they cannot be bothered by the timely expense when the secret to their success is their customers. In contrast, Wessigner’s company, PointClickCare, mostly focuses on copyright and trade secrets and so it invests most of its time and resources into Research and Development to stay ahead of the competition.

Small and medium-sized enterprises (“SME”) may not be aware of their IP rights and the steps they can take to protect them. A recent report to the Government of Ontario by the Expert Panel on Intellectual Property found that almost 60 percent of SMEs were aware of patents but only 2 percent actually held at least one.

Since 2017, over 200 young Canadian companies have sold ownership to overseas investors. According to the 2021 IEC Report, only 13.8 percent of patent families by venture-capital-backed Canadian startups were held by Canadian owners. 86.2 percent were held by foreign owners, with 60.4 percent of those owners based in the United States.

Why Are Foreign Hands So Full?

The IEC report found that the lack of Canadian patent ownership is due to the risk-averse nature of Canadian investors. Financing is incredibly important for startups to scale up and commercialize their innovation, and if they cannot find sufficient support in Canada, they must look elsewhere. This is one of the many reasons why Canada has become a source, but not a destination, for innovation.

As shown through the many takeovers happening in Canada, talent is clearly not an issue. What is missing are the anchor companies and investors that would support Canadian SMEs to their later-stage growth.

Should we be Concerned About Increasing Foreign Ownership?

Jones commented that to realize the economic benefits of Canadian innovations and protect the innovative work developed within Canada’s innovation ecosystem, national ownership may be essential in certain instances. To encourage national ownership, companies need the ability to remain headquartered in Canada with the support of Canadian acquirers.

On the other hand, while Tsintzouras’s Alert Labs has U.S. ownership, he still keeps his operations based in Canada. “We remained a Canadian company, we remain here, we still employ people here, we still grow, but we looked at what the best chance for our technology to make it to market and grow in scale,” commented Tsintzouras. He also highlighted a major aspect that is often overlooked when examining foreign takeovers: the company’s access to the U.S. owner’s network. The connections that the U.S. owners provided Alert Labs significantly contributed to its ability to enter certain markets and capitalize on certain opportunities. Rudzicz agreed and claimed that foreign ownership would not be a problem if the people and data stayed in Canada post-takeover.

So, What’s the Answer?

To take advantage of developing Canadian IP, we need to support IP commercialization, not place stringent restrictions on takeover or patent sales to prevent foreigners from acquiring Canadian IP. “We need to develop the commercial capabilities,” said Jones. “We also need to become a destination for product people: people who know how to build category-leading products and be able to anchor companies with that capability.”

In achieving this goal, Canadian policymakers play an important role. Their present initiatives in encouraging Canadian buyers, such as tax breaks and grants, have proven successful. However, the current numbers show that we need more sustained support for our scaling companies.

Overall, further supporting national IP commercialization instead of penalizing foreign takeovers seems to be the answer. Or perhaps Canada can take Alert Labs’s approach and encourage foreign takeovers but put policies in place to encourage growth and development within Canada. Whatever the approach is, we must act quickly as these takeovers will only increase Canada’s ever-growing opportunity costs.