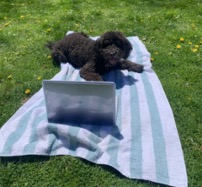 I am writing this article on a particularly sunny day. In order to take advantage of this rare Toronto sunshine, I am lying down in the grass with my parent’s pandemic puppy. Although I personally believe that this environment is highly conducive to productivity, I am not so sure I want my boss to know about my remote office set-up. While much of the privacy discourse surrounding remote work during the COVID-19 pandemic has centered around potential breaches of private information, I am also concerned about work-from-home surveillance.

Without the ability to physically oversee workers, some businesses are turning to digital surveillance. For example, Sneek is a popular platform that can be used to photograph employees every few minutes and generate a “wall of faces” which managers can review. While Sneek may combat certain challenges of remote work, such as communication lapses and feelings of isolation, it carries the risk of ‘function creep’ ¾ “the expansion of a system or technology beyond its original purposes” ¾ and could result in a loss of privacy for remote workers if misused by management. Maclean’s reported that companies like Sneek, which sell software that reports employee’s work ethic (sometimes referred to as “tattleware”), saw a huge increase in demand amidst the pandemic. Many “tattleware” companies frame their product as a way of restoring “human contact,” although David Heinemeier Hansson, creator of Ruby on Rails and Founder of remote-work-software firm Basecamp, warns that this “New Age language of social gathering” is being employed to “[elide] over the fact that workers are being watched.”

Violations of workers’ privacy may constitute a statutory or common-law tort, depending on the province. In Ontario, workplace violations of privacy are considered an intrusion upon seclusion, a tort recognized by the 2012 Court of Appeal decision in Jones v Tsige. However, the unique context of remote work creates uncertainty about where, when, and how surveillance is allowed. While a workplace is more cut-and-dry, with surveillance being permitted in public areas (e.g., a common workspace with cubicles) and not in areas with a “reasonable expectation of privacy” (e.g., washrooms and changerooms), things become complicated when our homes are also our workplaces and the line between personal and professional space is blurred. Silkie Carlo, director of the anti-surveillance charity Big Brother Watch, cautions that, “it’s important for people’s sense of autonomy and dignity, and their mental health, that the home remains a private space and we don’t go down the route of this really invasive constant monitoring of people’s homes.”

The increase in remote work surveillance sparked by the pandemic has accelerated the shift towards digital work supervision, prompting Sean Captain of Fast Company to predict that in the future, our supervisors will be less “the man” and more “the machine.” PwC, for example, has already been criticized for going too far after developing a facial recognition tool that logs when workers are absent from their computers. If and when legal challenges arise to address rapidly changing surveillance practices, some worry that arbitrators and courts will be out of sync with public expectations and be overly permissive of surveillance.

Although vaccination rates are increasing across the country, the national president of the Public Service Alliance of Canada, Chris Aylward, recently commented that “a return to the workplace is really not on the radar right now.” As companies adjust to the longer-than-expected period of remote work, they are looking to minimize the possibility of data breaches and maximize productivity. It may be tempting to implement worker surveillance software in pursuit of these goals, and in an effort to restore a sense of office culture, but businesses should also give weight to the potential legal and ethical consequences of doing so.